The name Canes Venatici, is Latin for “hunting dogs”. It is a faint constellation, but host to a number of galaxies such as M51, the Whirpool Galaxy.

Gemini is a well known zodiac constellation. Zodiac constellations line up with the plane of the Solar System in our sky, an intersection known as the ecliptic. This means you will find planets passing through Gemini from time to time. Gemini is also grazed by the plane of the Milky Way, and therefore has a few deep sky objects within its boundaries. Gemini’s brightest stars get their names from twins Castor and Pollux of Greek mythology.

M51, the Whirlpool Galaxy, gets its name from its bright and prominent spiral arms. It lies at a distance of 23 million light-years away. It also has a smaller, companion galaxy (NGC 5195). The two galaxies are one of the best examples of interacting galaxies.

M82, the “Cigar Galaxy” is an edge-on spiral galaxy, 12 million light-years away, and perhaps 37,000 light-years across. There are vast gas clouds in this galaxy, where stars are being born at an incredible rate. 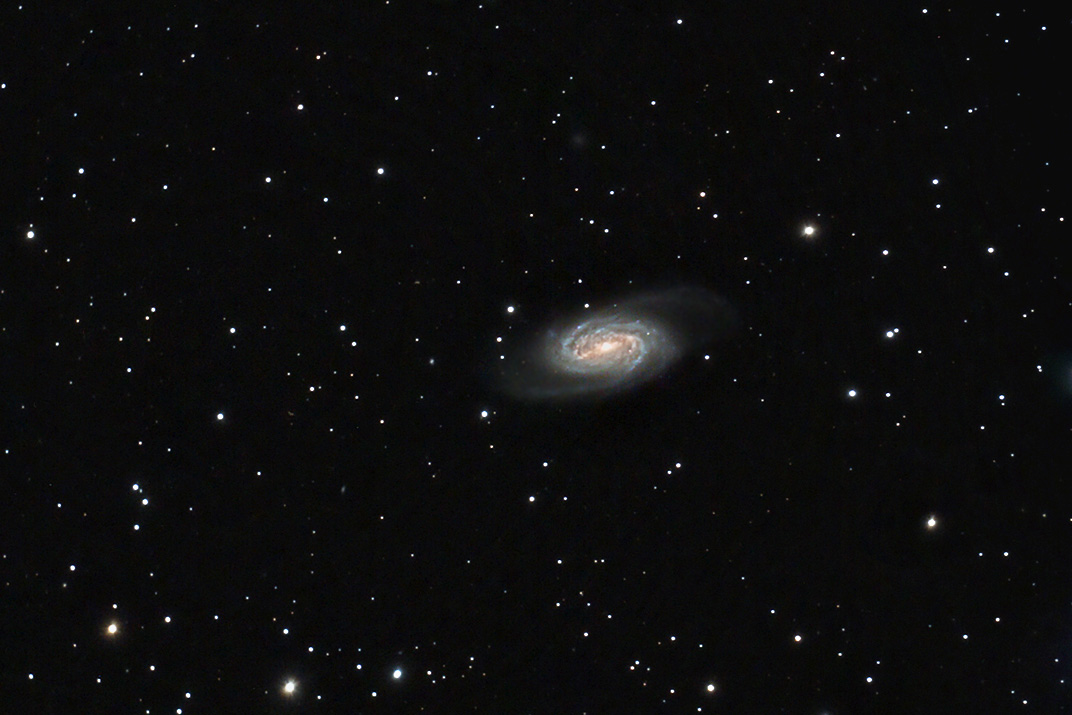 NGC2903 is a face-on barred spiral galaxy in Leo.

M3 is a globular cluster with a half of a million stars. It orbits the core of our Milky Way Galaxy almost perpendicular to the galactic disk. It is currently 33,900 light-years away, and approaching our Solar System at 100 miles per second.

The little open cluster M67 appears near its larger buddy, M44 The Beehive Cluster. These clusters are actually about the same size, but M67 is five times farther away. M67 is old for an open cluster; its stars are four billion years old.

Castor (α Geminorum) is a multiple star in the constellation Gemini, the twins. Through the telescope, a close pair of bright white stars and a more distant red dwarf companion are visible, but these are each spectroscopic binaries, making Castor a six-star system. Castor is about 50 light-years away. The bright components orbit each other with a period of about 450 years.

Iota (ι) Cancri is a binary star in the constellation Cancer, the crab. The brighter star is a pale yellow giant, and the fainter star is smaller and bluish-white. This pair is about 300 light-years away and the stars are almost 3000 astronomical units apart.

The Mc Math Pierce Solar Telescope is actually 3 telescopes-in-one. It was, at the time of its completion in the 1960s, the largest solar telescope in the world. It will remain the largest until the completion of the Daniel K. Inouye Solar Telescope (DKIST) in 2018. The Solar Telescope building looks like a large number 7 rotated onto its side. The vertical tower holds up 3 flat mirrors, which reflect sunlight down the diagonal shaft—a tunnel which extends 200 feet to the ground, and another 300 feet below ground, into the mountain. At the bottom of this tunnel are the three curved primary mirrors, which reflect the light of the Sun back up to about ground level, where the Sun comes into focus in the observing room.

SARA stands for Southeastern Association for Research in Astronomy. Formed in 1989, SARA sought to form a mutually beneficial association of institutions of higher education in the southeastern United States which have relatively small departments of astronomy and physics. At the time, a 36″ telescope on Kitt Peak was being decommissioned by the National Observatory. The Observatory planned to award the telescope to new tenants who showed they could use the telescope well. SARA’s proposal for use of the telescope was selected out of about 30. Today, SARA operates the 0.9 meter telescope of Kitt Peak, as well as a 0.6 meter telescope at Cerro Tololo in Chile. Both telescopes can, and are mostly used remotely.