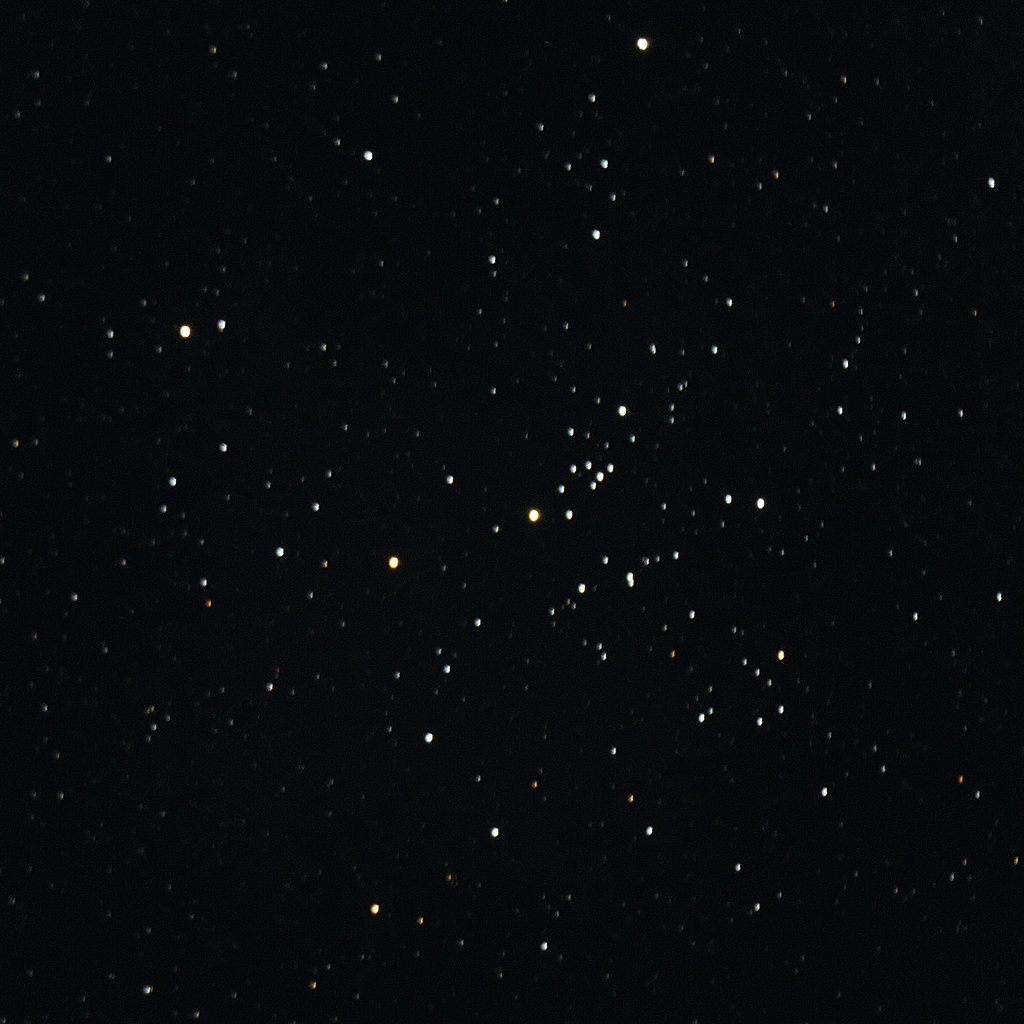 Messier 25 is an open star cluster in the constelation Sagittarius. It is about 2,000 lightyears away, and 13 lightyears across.

The 2.1 Meter telescope has an 84″ primary mirror made of Pyrex, that weighs 3,000 lbs. The telescope became operational in 1964—one of the first operational reserach telescopes on the mountain. As part of the National Optical Astronomy Observatory (NOAO) for many decades, it is an important part of the history of the mountain, and has made many important contributions to astronomical research. Despite its significant role within the National Observatory, by 2015 the time came to pass the telescope on to new tenants, so NOAO could focus its efforts on its newer, more advanced telescopes. The Robo-AO team stepped in, and installed their state-of-the-art robotic adaptive optics system on the 2.1 Meter. Adaptive optics allows telescopes to nearly eliminate the distorting effects of the atmosphere, greatly increasing the resolution of the telescope. Thanks to its new tenants, suite of instruments, and the dark skies of Kitt Peak, the 2.1-meter continues to make important contributions to astronomical research.

Originally, a 36 foot (11 meter) radio telescope resided in this dome. Built in 1967, the 36 Foot Telescope, as it was known, was a part of the National Radio Astronomy Observatory (NRAO). In 1984, it was replaced with a slightly larger dish, and the name was changed to the 12 Meter Telescope.

In 2013, the telescope was replaced with ESO’s ALMA prototype antenna. The new dish is the same size, but has a much better surface accuracy (thereby permitting use at shorter wavelengths), and a more precise mount with better pointing accuracy. The 12m Radio Telescope is used to study molecules in space through the use of molecular spectroscopy at millimeter wavelengths. Many of the molecules that have been discovered in the interstellar medium were discovered by the 12m.

Though the Calypso telescope and its 1.2 meter mirror have now been acquired by the Large Synoptic Survey Telescope team, it once occupied the large “garage on stilts” on the west side of the mountain. Edgar O. Smith, a businessman-turned-astrophysicist, designed Kitt Peak’s only privately owned telescope to create the sharpest possible images. The garage-like building rolls away on rails, leaving the telescope very exposed, and able to cool to ambient temperature. Its adaptive optics system can adjust 1,000 times per second to remove atmospheric blurring. Calypso will eventually be moved to Cerro Pachón in the Atacama Desert of Chile. The “garage on stilts” sits empty.

The Very Long Baseline Array (VLBA) is a part of the Long Baseline Observatory (LBO). It consists of a single radio telescope made up of ten 25 meter dishes. The ten dishes are spread across the United States, from Hawaii to the Virgin Islands. One dish is located on Kitt Peak: The LBO Kitt Peak Station. Kitt Peak Station, along with the other dishes, work in unison to point at the same targets at the same time. The data is recorded and later combined. By spreading the dishes out over such a great distance, instead of building them all in the same place, a much higher resolution is gained.

SARA stands for Southeastern Association for Research in Astronomy. Formed in 1989, SARA sought to form a mutually beneficial association of institutions of higher education in the southeastern United States which have relatively small departments of astronomy and physics. At the time, a 36″ telescope on Kitt Peak was being decommissioned by the National Observatory. The Observatory planned to award the telescope to new tenants who showed they could use the telescope well. SARA’s proposal for use of the telescope was selected out of about 30. Today, SARA operates the 0.9 meter telescope of Kitt Peak, as well as a 0.6 meter telescope at Cerro Tololo in Chile. Both telescopes can, and are mostly used remotely.

Spacewatch is the name of a group at the University of Arizona’s Lunar and Planetary Laboratory founded by Prof. Tom Gehrels and Dr. Robert S. McMillan in 1980.  Today, Spacewatch is led by Dr. Robert S. McMillan.  The original goal of Spacewatch was to explore the various populations of small objects in the solar system, and study the statistics of asteroids and comets in order to investigate the dynamical evolution of the solar system.  CCD scanning studies the Main-Belt, Centaur, Trojan, Comet, Trans-Neptunian, and Earth-approaching asteroid populations.  Spacewatch also found potential targets for interplanetary spacecraft missions. Spacewatch currently focuses primarily on followup astrometry of such targets, and especially follows up objects that might present a hazard to the Earth.